In ancient China, filtration technology has been applied to production, and paper made of plant fibers has been made in the 2nd century BC. In 105 AD, Cai Lun improved the papermaking method. The water is filtered through the gap of the bamboo curtain, and a thin layer of wet pulp is left on the surface of the bamboo curtain, which becomes paper after drying.

In the actual filtration process, the three methods often appear at the same time or one after another. The processing capacity of the diatomite filter depends on the filtration speed. When the solid particles in the suspension are large and the particle size is uniform, the pores of the filtered residue layer are relatively smooth. The speed of the filtrate passing through the filter residue layer is relatively large. The use of a coagulant to aggregate the fine particles into larger agglomerates is beneficial to improve the filtration speed.

Diatomaceous earth filterAccording to the method of obtaining the filtration driving force, it is divided into three categories: gravity filter, vacuum diatomite filter and pressurized diatomite filter. Gravity filter is formed on the filter medium by means of the gravity and potential difference of the suspension. The pressure of the filter is used as the driving force for filtration, and it is generally operated intermittently. 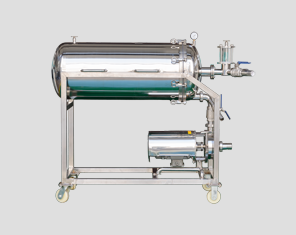 Previous: The use of the filter plates of the diaphragm filter press should be checked regularly

下一条: What is the operating principle of the double-stage filter? What is the difference between it and the traditional filter?