Analysis of why the pressure of automatic filter press fails

2. Electromagnetic reversing valve failure: the inlet and outlet pipes can be disassembled from the oil cylinder, and the electromagnetic reversing valve can be pressed loose to check the internal leakage. If the internal leakage is too large, use kerosene to clean or replace the sealing parts. Sometimes small internal leakage is insufficient In order to affect the oil pressure, it will slow down the advance and retreat speed of the oil cylinder. Due to long-term impact, the wear of the reversing valve push rod is shortened, or the contact point between the armature and the push rod is worn, resulting in insufficient reversing stroke of the spool.

3. Insufficient oil level: Because the hydraulic system of the automatic pressure-holding filter press is in a high pressure state for a long time, some seals will inevitably leak oil. At the same time, after the automatic filter press is used for a period of time, a small amount of hydraulic oil will naturally evaporate and lose, resulting in oil tank oil. When the oil level is too low, the oil pump will not pump 46 or 68 hydraulic oil. 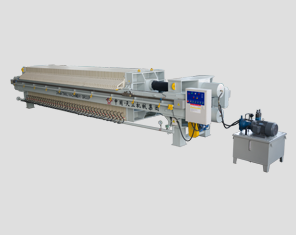 Previous: What is the filtering principle of the filter